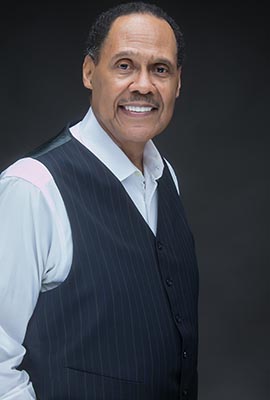 Don Jackson is one of the country's most successful television and media entrepreneurs. His Chicago-based, Central City Productions, has produced, marketed and syndicated television shows for nearly a half-century, with many of the shows becoming bedrock programming for African-American audiences. Jackson is currently working on the launch of Stellar TV, a 24-hour seven day a week faith-based television entertainment network targeted to African American audiences that will premiere during the 2020 television broadcast season around the country.

He's also developing the $37 million National Museum of Gospel Music honoring and chronicling the history of American gospel music, scheduled to open in September 2020. Jackson's media career began in 1970 when he founded Central City Productions, Inc. For more than four decades, the company specializes in marketing, promotion, sales, syndication, digital media and the production of television programs for African- Americans.

Today, Central City Productions is a full-service television company that produces, syndicates, and manages advertising sales for all of the company's national television programs. Its mission is to develop television programming designed to communicate positive, uplifting images of Black people all over the world.

Under Jackson's guidance and vision, CCP has launched many new and unique television programs for African-Americans. Some of these programs grew to become must-see shows that are watched daily, weekly or annually by African-Americans across the globe. Many of these programs, like the Stellar Awards, have been broadcast for more than 30 consecutive years. Other shows airing annually include the Black Music Honors, Black College Quiz, Stellar Tribute to the Holidays, and Mentoring Kings, just to name a few.

Jackson's latest project is the $37 million National Museum of Gospel Music in his hometown Chicago on the site of the former Pilgrim Baptist Church, known as the birth place of Gospel music and home of Thomas A. Dorsey, the father of Gospel music. This institution will be the first honoring America's gospel music and feature exhibitions, a research library and performing arts center.

In addition, Central City Productions will launch Stellar TV, the first African American owned Broadcast Diginet television network in the country that will offer family friendly programming that is inspiring and motivating to African-American audiences.

Jackson gives back to the Chicago community as a member of several organizations. He is the former chairman of the board of Chicago's DuSable Museum of African American History. He also previously served on the boards of Northwestern University, Junior Achievement of Chicago, Columbia College, Gateway Foundation and the Chicago Transit Authority Board.

In addition, Jackson was the founder of A.B.L.E. (Alliance of Business Leaders and Entrepreneurs), the first business organization bringing together Black leaders in the business community to network, to address business issues and to provide a legacy for future African-American entrepreneurs. A.B.L.E. has since merged into the larger organization, Business Leadership Council.

He started his illustrious career as a salesman with R.H. Donnelley in 1965. He then became an account executive with WBEE-RADIO the following year. Jackson was the sales manager at WVON-RADIO until 1970 before founding Central City Productions, where he remains as Chairman and CEO.

Jackson was married to his beloved wife Rosemary Jackson for 52 years before she passed away in February 2018. The couple has two adult children and three grandchildren, Donovan, Dain and Riley. Their daughter Rhonda is a graduate of Syracuse University and their son Baba Dainja graduated from the University of Minnesota.